Does this not give further support of my cell phone meanderings in my Dec. 20 post?  Last night I walked into an elevator in Queens in which a man was jabbering on his cell, facing the wall, and he says in a perfectly loud voice “oh wait, I can’t tell you now,..no, yeah someone is listening….” Door opens and he’s out before I can can tell him…what?  That I am not listening?  That he has an exaggerated sense of self-importance?  I don’t know but it’s a good thing for him he got out fast…couldn’t even say for sure if he was wearing his pink tie! 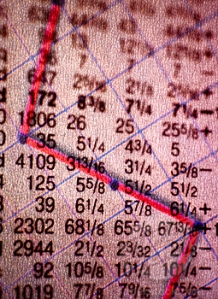 calls itself  “high finance for real people,” which may distinguish it from being for the computerized  robots that conduct roughly 70 percent of all trading. These days the robots are reading their own reports, generating further “structured” data that are folded into “narratives” tailored to the target audience of the moment.

What I’d like to know is whether programmers endow computerized traders with the same superstitions as their human counterparts. [i]  When you consider that stock-trading “experts” are not accountable for predictions that don’t pan out, it is easy to see why superstitions are common among traders.  (Even a rare trader, such as myself, would need to take them into consideration simply because of the psychology of others.) You only need to follow what the 5-to-8 key market reports say about the same stock on the same day to see that they’re all over the map. Anyway, listen to Phil if you wish, but don’t forget my standard caveat for PhilStock: Never take any stock advice from me.[i]

2. Diamond Offshore (DO). DO, the stock metaphorically tied to this blog’s deep-drilling excursions into statistical foundations—and reported at $60 in my December 20, 2011 post—is now up to around $67! END_OF_DOCUMENT_TOKEN_TO_BE_REPLACED

Dear Reader: Not having been at this very long, I don’t know if it’s common for bloggers to collect a pile of rejected posts that one thinks better of before posting. Well, here’s one that belongs up in a “rejected post” page (and will be tucked away soon enough), but since we have so recently posted the Fisher–Neyman–Pearson “triad”, the blog-elders of Elba have twisted my elbow (repeatedly) to share this post, from back in the fall of 2011, London. Sincerely, D. Mayo

Egon Pearson on a Gate (by D. Mayo)

Did you ever consider how some of the colorful exchanges among better-known names in statistical foundations could be the basis for high literary drama in the form of one-act plays (even if appreciated by only 3-7 people in the world)? (Think of the expressionist exchange between Bohr and Heisenberg in Michael Frayn’s play Copenhagen, except here there would be no attempt at all to popularize—only published quotes and closely remembered conversations would be included, with no attempt to create a “story line”.)  Somehow I didn’t think so. But rereading some of Savage’s high-flown praise of Birnbaum’s “breakthrough” argument (for the Likelihood Principle) today, I was swept into a “(statistical) theater of the absurd” mindset. END_OF_DOCUMENT_TOKEN_TO_BE_REPLACED

What are the chances?  Flip on the radio to NPR in my car and hear a commentator: “well we are certainly not expecting something like a roller coaster with Josephine at the back”—and  I thought, they cannot be talking about Napoleanland.  But they are! And today, Feb 18. is an important reenactment of a battle, and also the deadline for the proposal for this theme park!  So there may yet be a boat ride to Elba…we’ll see.*

*Readers wondering at the Elba connection might start at the beginning—the metaphor of the frequentist in exile (when it comes to statistical foundations).

Distortions in the Court? (PhilStock Feb 8)

Anyone who trades in biotech stocks knows that the slightest piece of news, rumors of successful /unsuccessful drug trials, upcoming FDA panels, anecdotal side effects, and much, much else, can radically alter a stock price in the space of a few hours.  Pre-market, for example, websites are busy disseminating bits of information garnered from anywhere and everywhere, helping to pump or dump biotechs.  I think just about every small biotech stock I’ve ever traded has been involved in some kind of lawsuit regarding what the company should have told shareholders during earnings.  (Most don’t go very far.)  If you ever visit the FDA page, you can find every drug/medical device coming up for considerations, recent letters to the company etc., etc. END_OF_DOCUMENT_TOKEN_TO_BE_REPLACED

Am I the only one who occasionally feels that when an ordinary phenomenon, familiar to most women, becomes the focus of a “rigorous scientific” study like this that the whole dynamics is convert

ed in a distorted, unflattering and rather (pea)cockamamie light?

Men put on their best behaviour when attractive ladies are close by. When the scenario is reversed however, the behaviour of women remains the same. These findings are published today, 2 February 2012, in the British Psychological Society’s British Journal of Psychology via the Wiley Online Library.

The research, which also found that the number of kind and selfless acts by men corresponded to the attractiveness of ladies, was undertaken by Dr Wendy Iredale of Sheffield Hallam University and Mark Van Vugt of the VU University in Amsterdam and the University of Oxford. END_OF_DOCUMENT_TOKEN_TO_BE_REPLACED

I was scanning the blogosphere late one night last week, amazed at the humongous number of blogs, each blog listing other blogs on their blogrolls; and upon searching items in the blogroll, one is led to still other blogs, with yet more blogs listed on blogrolls* with little repetition.  It is pretty overwhelming.  Do people manage to read this stuff?  I mean, the current blog is a niche audience, but most of the others I saw  pretty much review the same current events (with slightly different spins): Romney, Superbowl, Facebook IPO, Planned Parenthood, too much snow in UK, Shieldcroc.  One blog included on its blogroll list a blog named “There’s At least One Blog That Nobody Reads,” which I obviously didn’t read.

Studying the blogrolls I noticed that occasionally, perhaps in error, a blog would actually list itself in its own blogroll.  Those self-referring blogs were rare though (not that my search was exhaustive, though it was exhausting.)

Always on the look-out for just such a phenomenon (if only to show students it can really happen), I immediately got the idea to start a blog, call it Goedel’s Blog (G), that would list, on its blogroll, all blogs that do not list themselves on their blogrolls (say as of a fixed date).  Any blog that does mention itself on its END_OF_DOCUMENT_TOKEN_TO_BE_REPLACED

The new blog still has a number of unfinished elements; key words and some photos from blogspot are still making their way over here (given all the boxes we received, I’m surprised they’re not all here).  You can always go back to errorstatistics.blogspot.com to look something up.

I will continue with the philo of statistics agenda, but intersperse with lighter topics that arise.  Now that there are more than a few posts, I think we must group those on philo of stat each month so that they are by themselves.  I spoze “PhilStock” should be its own page.  (Of course what everyone is talking about is the Facebook IPO and whether it will do as well or badly as a bunch of other related IPOs: Zynga, Groupon, Linked-In, Renren.  I never use Facebook, so I haven’t a clue (comment if you have thoughts). ) END_OF_DOCUMENT_TOKEN_TO_BE_REPLACED

Reflections on the Blog Paradigm Change 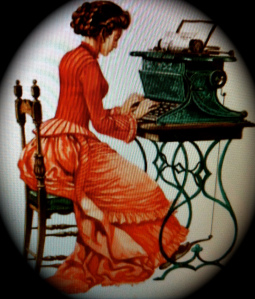 Dear Reader: (Wed. noon):  Well we’ve moved, in the sort of piecemeal, unsettled manner that I suppose the error statistical philosophy favors: take the leap first, then be compelled to adjust by trial and error stress tests afterward.  As with all such progressive changes, while some of the old problems are solved, new and deeper problems appear; things that were easy to explain in the old paradigm are no longer explicable (as of yet), and some activities that were problem-free and predictable before, are now filled with puzzles and uncertainties.*

I’m not throwing out this glorious old typing machine just yet however…it still serves in some areas as a kind of limiting case, and standard, when the exactitude of the new paradigm is scarcely needed.  Well, we’re stuck here now, no switching back you know once one has converted (though I may yet sneak back there from time to time)…Taking a day off to unpack all those boxes that the moving people brought over to errorstatistics.com this morning.

*Example, look at how I cannot seem to wrap the text around the picture—a trivially easy feat, 95% reliable, on the old paradigm; posting pictures is, again, fraught with novel problems.  Granted some of the most pervasive anomalies in the old paradigm  are now avoided…But at this point, I honestly cannot predict that this shift won’t turn out to be a degenerating one!

If this is real, I’m going.  I mean, a ski run through a battlefield “surrounded by the frozen bodies of soldiers and horses” and a recreation of Louis XVI being guillotined?  I expect they will also have a scary ride called, “Exile to Elba”.  I wonder what that might be like?  Just think of what they might sell at the giftshop.

“Napoleonland”, the brainchild of former French minister and history buff Yves Jégo, is being touted as a rival to Disneyland – assuming, that is, it can gather the £180 million needed to leave the drawing board. END_OF_DOCUMENT_TOKEN_TO_BE_REPLACED