Are you butter off now?

“Are you butter off now? Deconstructing the butter bust of the President” D. Mayo

I thought the sand sculpture of the President was strange, but this unsalted butter bust of the President being wheeled around Chicago (under the banner of “Harvest”) seems downright creepy.

“If you see a yellow-ish sculpture of a man’s head rolling through the Loop Friday afternoon, your eyes aren’t playing tricks on you: It really is a bust of President Barack Obama made of butter.”

“Though one would be right to say that artist Bob Kling is buttering up the President with his high-fat bust of his likeness, the act shouldn’t be considered an endorsement.

“The piece is, itself, not pro- or anti-Obama,” said Mathew Wilson of art group Industry of the Ordinary, which commissioned the head-turning head of butter on display in Chicago.” 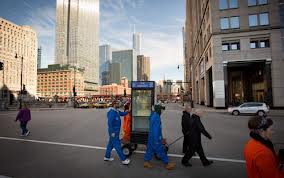 I cannot help wonder at the subliminal messages, intended or unintended. What first came to mind was the expression: “to know which side one’s bread is buttered on”:

Defn: to be aware of where your money comes from; to be loyal to the person or thing that will benefit you the most.

What do you think?

Another thought had to do with that “Teflon” metaphor often used in politics, so for instance, being unscathed by the (now impeached) Illinois Governor, “Pay or Play” Blagojevich, and by that greasy (jailed) Tony Rezko who lubricated the wheels to expedite that “boneheaded” property deal in Chicago.

Finally, the idea comes to mind for an even more absurd ending for that suggestive “first time” political ad by some (up and coming?) young actress named Dunham:

Existing ending:“My first time voting was amazing. It was this line in the sand. Before I was a girl. Now I was a woman. I went to the polling station and pulled back the curtain. I voted for…”

New ending:…. the one and only presidential candidate featured in a lifelike butter sculpture!

3 thoughts on “Are you butter off now?”